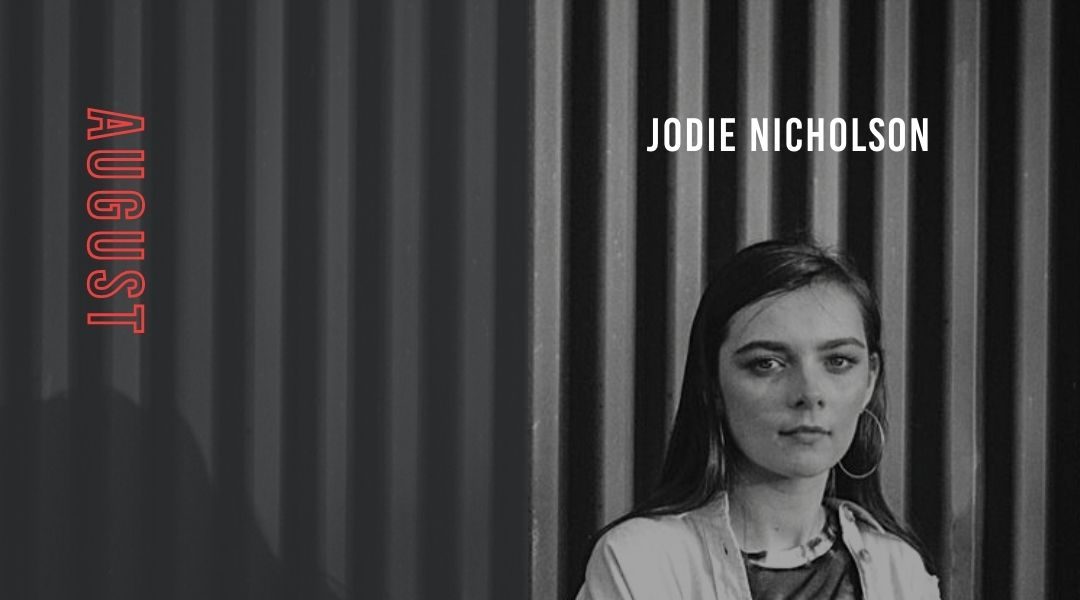 Next up we have Teesside songwriter Jodie Nicholson, who just last week released her phenomenal EP ‘Can’t Escape The Feeling’, with praise arriving throughout the press landscape, as well as BBC Radio 1 & 6 Music support, live slots alongside Georgia and Jamie XX, and an upcoming appearance at All Points East this Monday. With additional festival dates this autumn and a headline tour already announced for 2022, we sat down with Jodie to discuss her development so far.

Hello! I’m from Hurworth-on-Tees, a little village just outside of Darlington. I’m a lover of harmonies, I shift between genres of indie, folk, electro and alt pop, and never really know which direction the next song will take me.

I spent a fair amount of time playing covers in local pubs, bars and restaurants from around 16 up until 22 when I finished uni. Between those little background gigs, around 2015, I became involved in Tyneside Rain as a vocalist, a rock opera by Roger Wicks and Syd Columbine that got airplay on our local BBC Introducing Show. Bob Fischer (previous BBC Introducing on Tees presenter) invited me to do a session and interview and it was the first time I’d really thought of myself as a solo-artist.

Fast forward a bit, I self-produced and self-released my debut album Golden Hour in 2019 and Jo Whiley played ‘Losing Track’ on BBC Radio 2. I released ‘Move’ in 2020, with support of Help Musicians ‘Do it Differently’ and in the space six months I’d received airplay from Huw Stephens and Emily Pilbeam on BBC Radio 1, Best of BBC Introducing 2020 and made 6 Music’s Introducing playlist. My new EP ‘Can’t Escape the Feeling’ was released last Friday, my first headline tour has been announced for Feb 2022 and I recently played the main stage at Wilderness Festival alongside Georgia and Jamie XX.

It’s a four-track EP called ‘Can’t Escape the Feeling’, which I released last Friday! If you’ve never heard my music before, I feel like this EP is a bit of a deep-dive into all the different facets of my sound and who I’ve become as an artist/songwriter. You’ll go from a moody, break-up bop with a 7⁄8 chorus in the lead single ‘Why Would You (Go)’, to a warm, folk-y ‘Second Sun’ that’s centred around hope and storytelling. It feels special to have released a body of work that demonstrates those shifts in sound, yet still feels cohesive and ‘me’.

The EP collectively plays on what it means to feel alone in a familiar world, reflecting different stages of change in my life and how I processed those through writing. It’s probably the most honest, immersive, compelling listen out of everything I’ve released so far.

Listening to artists experiment with their sound across releases. Some of my favourite bands/artists have that status for me because one, I love their music, but two, they’re unafraid to completely switch genres with their next release and it’s amazing because no matter what they do, it still sounds like them. It’s super inspiring seeing artists play on your perception as a listener, of who you think they are and the type of music they create, and how freeing it must feel as the artist to just create and not worry about where it fits in the world of genres/categories, just making music you love and are super proud of. That’s always been the goal for me I think.

The EP was recorded in exactly the same way as Move, working completely remotely with the amazing producer Tim Bran (who’s previously worked with Aurora, London Grammar, Rae Morris). Everything was done over zoom, screen sharing and a live audio stream so we could both see the Logic session and listen together. I recorded vocals, piano and guitar in my little studio room at home, whilst Tim was controlling my laptop screen as a remote recording engineer – madness! We gradually built the tracks up bit-by-bit, layering synths, recordings I’d taken on my phone, and Tim also recorded a few additional instruments (including his gorgeous piano), again, whilst we were on zoom. We experimented and saw what ideas we really missed once we took them out, which makes a big difference.

I found the process really liberating. Working with Tim was really fun and so inspirational. I would never have had the confidence to experiment and explore ideas with each of the songs on the EP as much as I did if I was self-producing them, but with Tim I felt like I was in very safe hands because he really understands my sound. I think we both saw it as a very collaborative process and exchange of ideas. I’d start by taking a demo of the song to Tim, which I recorded at home, and we’d go from there.

It wasn’t until we had all the EP tracks side-by-side that I realised really what my sound is, so this process in many ways has helped me recognise that and what music I’m capable of when I create and collaborate with people who are on the same wavelength. It’s really powerful.

GIGS! I’m playing an ace run of festivals (All Points East, Hartlepool Waterfront, Liverpool Sound City, Twisterella and Last Train Home). I’m supporting Nathan Ball next month at Omeara in London, the mighty Martha Hill at Westgarth Social Club on October 22nd, and in November I’m opening for Nerina Pallot for a run of dates. It’s going to be a big warm-up ahead of my first headline tour next year (local dates include Stockton, The Georgian Theatre Feb 5th and Newcastle, The Cluny Feb 12th)!

Check out Jodie Nicholson’s favourite acts from the region in her personally curated playlist below.