In October 2017, the BBC Introducing Amplify conference took over the ExCel in London, celebrating three days of industry talks and live music from emerging artists. With the announcement of a Women in Music panel taking place at the conference, all ears were on the conversation about gender equality on the music industry. Louise Henry told Generator more about how the event went. 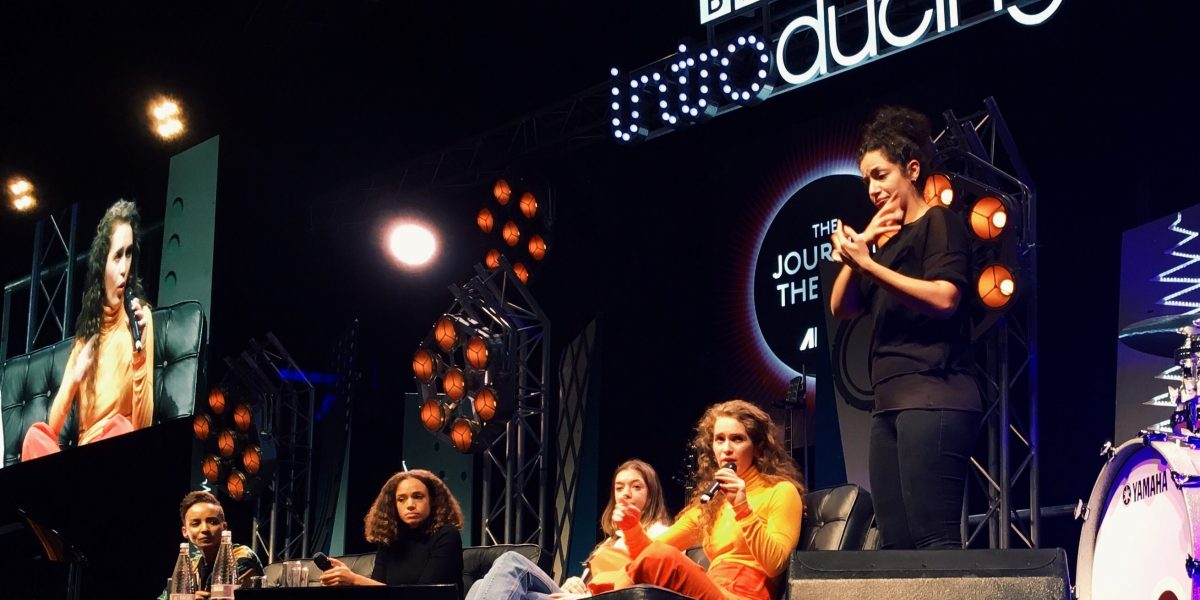 On the day of writing this, The Guardian published a report stating that tonight, more than two thirds of live music acts performing across the UK will feature no women on stage. Only 9% of the 374 gigs listed included an all female line up. Girl power or no girl power, music is still a man’s world.

At BBC Music Introducing’s recent Amplify conference, a ‘Women in Music’ panel hosted by BBC Radio 1’s Adele Roberts discussed the notion of being a woman in the industry in 2017. “To succeed in this business, you just have to be yourself. Times are changing for women and I’m not worried”, was Marmozets singer Becca Macintyre’s response, and I have to disagree. Women make up over half of the population, yet we’re barely making a dent on the stage. Yes, Adele, and Beyoncé are among the highest earning musicians of our time, but their success has not come without scrutiny. Back in 2015, Adele spoke to Rolling Stone magazine about the media’s obsession with her body; “I’ve been asked ‘Would you do Playboy?’ so many fucking times, it’s ridiculous,” she added. “And is that because I’m a woman or because I’m fat?“ Beyoncé’s self-titled album was declared a mission statement for empowerment and feminism, and has admitted to being “A woman in a male dominated society”. If the disparity is so visible from the top, then clearly there’s work to be done at the bottom, too.

Women make up over half of the population, yet we’re barely making a dent on the stage.

One thing that repeatedly comes up in discussions with female artists is whether or not we should be highlighting their gender, and I get it; no one wants their reproductive organs to be their USP. Despite being on Amplify’s all female panel, Rae Morris is “Sick of being asked about being a woman. I mean it’s great to contribute to the discussion, but I just want to get on with my music”. We see it all the time, “female fronted band”, or “all girl group” forming the basis of a band’s description, and as one audience member pointed out, Spotify even promotes gendered playlists. Their “Women of Rock” playlist features 114 songs, yet the absence of a male equivalent emphasises the idea that a male voice is the default. “Why are female vocals treated as a genre?” the same audience member asks. Is there a solution? Third panellist, Jones, suggests that women are more likely to “impose limitations on themselves,” and that the next generation of female musicians must be confident, and “true to themselves”.

No one wants their reproductive organs to be their USP.

Confidence is key of course, though visibility is imperative, too. If girls can’t see themselves in a role, how will they ever believe they can achieve it? The same goes for age, class and race; and although that’s another conversation altogether, the notion of accessible role models still applies. The more women we see on stage, or hear on the radio, the more likely our daughters are to pick up a pen and start writing songs, or begin drum lessons. However, the conversation must go beyond the women we see on stage. Of the three women on the panel, none can recall working with many (if any) female producers, sound technicians, bookers, or managers. Rae name-drops Briony Turner, her A&R at Atlantic Records, but she is clearly the anomaly. Also the anomaly, are the women on the ground. Just two years ago, Safe Gigs for Women was founded, working with venues, artists and promoters to combat sexual harassment at live music events. Thankfully none of the panellists recall any examples of sexual assault, though they do agree that image is more of an issue for them than their male counterparts. “There is this expectation to be the perfect popstar” Rae states, “but we should be allowing women the choice to be overtly sexual, or to be completely free from it”.

There is this expectation to be the perfect popstar

There’s a lot of negativity in the last four paragraphs, and the intention is not to scaremonger. Things are improving, there are hundreds of successful women in the industry, but we cannot and must not be complacent. For every Adele or Beyoncé, is another young girl being told she isn’t good enough, or attractive enough. Fortunately, the industry is taking note, and support is available. If you’re reading this in the North East of England, get in touch to see how Generator’s WeCreate programme can support you. Alternatively, PRS Foundation are a wealth of knowledge and encouragement; Women Make Music supports the development of female singers and composers.

Most importantly though, support your local female artists, and ensure that the young women in your life are encouraged to be whoever they want to be.

Louise Henry is a festivals and projects coordinator and writer for a number of music and culture publications. She is currently working with the Shakespeare Schools Foundation.