A week of workshops, drop in advice sessions and collaboration at Obodo Studios Newcastle.

OBODO Studios will be hosting a week of workshops and advice sessions from 28th March – 1st April 4:00 pm – 9pm, exploring everything from production, to sound design to synths and sampling.

These free workshops are open to all levels of ability, whether you are taking your first steps into the world of production or are highly skilled. Spaces are limited – space priority will go to WOC, QTIPOC, LGBTQ+ or low income/unemployed people

Please note: these workshops are ring fenced for NE postcodes, funded by NCIF

Introduction to electronics: building a sampler from electronic components

All sound/electronics experience welcome. All kit provided, although if you have a soldering iron to bring this would be helpful!

After spending 25 years at AIR Studios, Sphere Studios and Abbey Road, Ricky has credits on anything from Queen and John Lennon to Robbie Williams. There will be eight one hour mixing slots available across the week.

Please bring a mix that you would like to develop either as a logic or pro tools files or as stems. You can also bring your laptop that you work on for ease.

All sound design experience welcome (beginner to pro). Sound recording/generating/editing equipment will be supplied (please do bring along your own too!)

Mix drop in with Ricky Graham. After spending 25 years at AIR Studios, Sphere Studios and Abbey Road, Ricky has credits on anything from Queen and John Lennon. There will be eight one hour mixing slots available across the week.

Please bring a mix that you would like to work on either as a logic or pro tools files or as stems.

To round off the week will be holding a monstrous five hour synth Jam, if you already have your own gear and want to collaborate, please feel free to join, equally if you have never even been near a synth we have plenty to play on.

Immersive audio, with live surround mixing. Bring any gear you’d like to experiment with, otherwise there will be plenty here to use at the studio

James Hall is a composer, sound designer based in Newcastle, UK. With over 15 years experience working in the music industry James decided to transition into film post production, sound design and composition in 2015 which took him to Berlin where he worked out of Funkhaus Studios. From there James moved to London and developed his craft and business for over 5 years. Now based back in the North East, Hall works with clients such as Intel, Vogue, Guinness, Vice Media, BMW, Google and many more. As well as a plethora of commercial work he also works on feature documentaries and films too.

Jamie Cook is a Newcastle based sound designer, and founder of independent media production outfit Howzat TV. His early career saw him create interactive surround sound installations, most notably at the Laing Art Gallery in 2017 with ‘Echoes and Outros’. This was an installation he co-curated with 3 other local artists, consisting of original work of theirs and the gallery’s contemporary collection, inducing Francis Bacon’s Study for Figure VI. Since then he has composed and produced soundtracks for numerous contemporary dance, theater and film works, and worked on many community focussed creative projects. He now runs Howzat TV – A.V. media production outfit that champions local, independent, creative work (based at Cupola Studios).

The enrichment week will be held at James’ studio in Newcastle 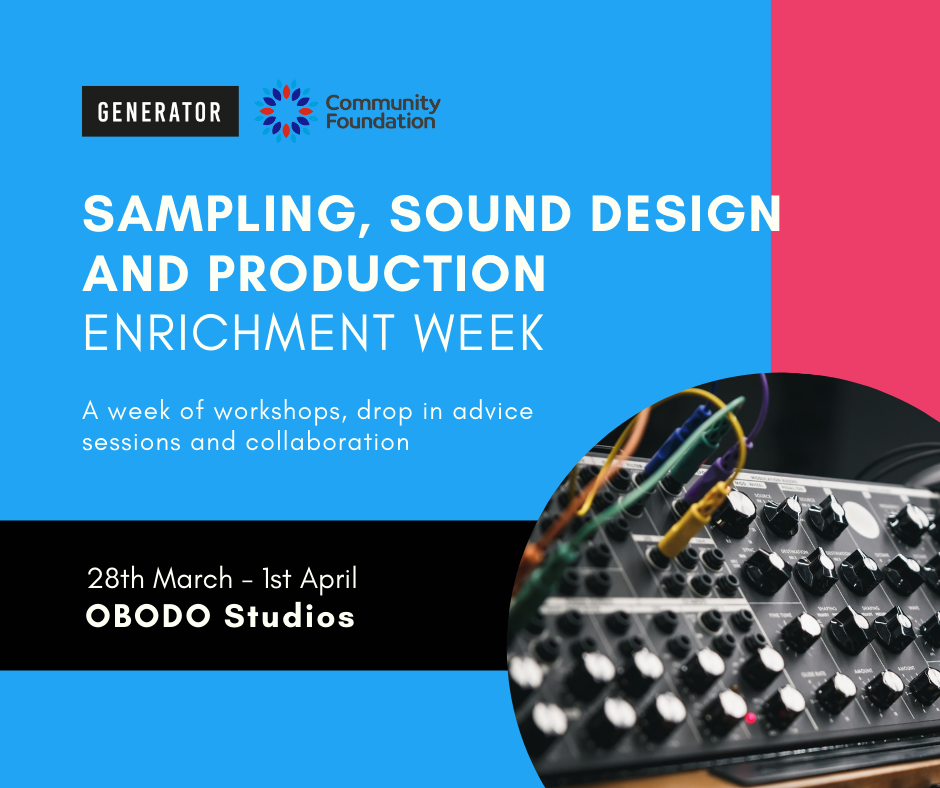